It's a Small World!

How about a little mid-century mod to light up your life? 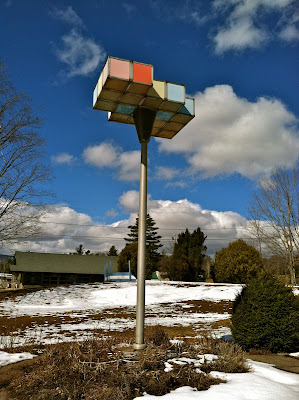 When passing by the Villa Vosilla, the Italian resort hotel in Hunter, one can't help but notice the distinctively retro lamps that dot the landscape. According to their website, owner John Vosilla was so enchanted after attending the 1964 World's Fair in New York City, that he wanted that magical moment to last forever. And so, he purchased a trio of original World's Fair street lamps, known as luminaires, to light the way in welcoming his guests. 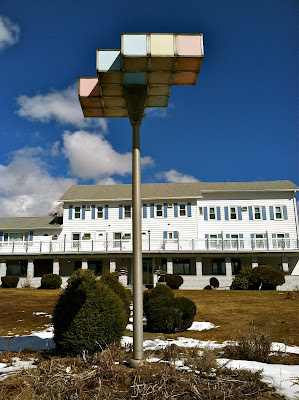 Here they are in their original setting: 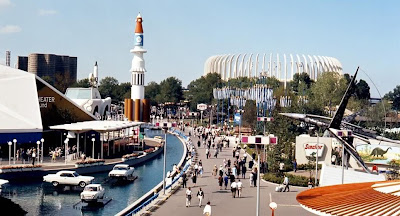 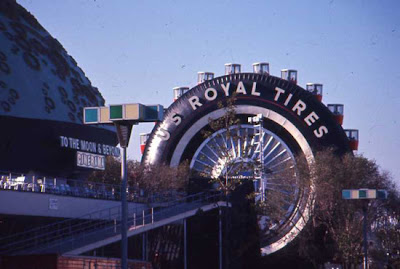 Here's one more, because I dig that boy in his khakis and Keds. Pay no attention to the man in the hat. 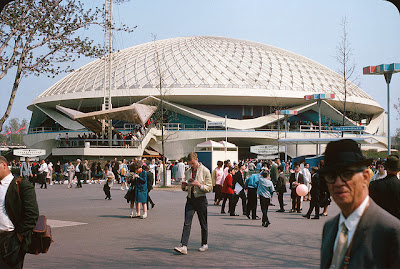 There were 76 different cube and color combinations used in the 1,842 luminaires that lit up the walkways of the fair at Flushing Meadow Park in Queens. The triangular bases contained state-of-the-art high fidelity speakers that were tied into the public address system. This allowed the fair to broadcast background music and announcements. 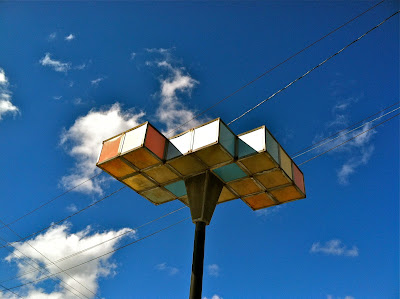 Here's one more photo that I took in the summer while passing by the Villa Vosilla. 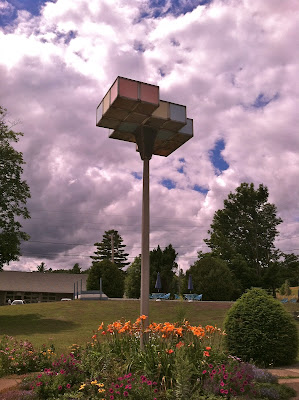 I was thrilled to find out about the World's Fair connection regarding these lovely luminaires and I chose the title for this post - It's a Small World! - for two reasons, the first being the surprise at finding a remnant of a major cultural event from the past seemingly plopped into the present (and many miles away!). The second is a bit more personal. When I was 11 months old, my parents took me and my older brother to the 1964 World's Fair (My dad had been to the 1939 World's Fair when he was a boy). To this day, my mother tells me how much I smiled and giggled while riding on the Disney attraction, It's a Small World. If only I had been a few years older, I would have remembered it myself! Luckily, there are so many publications, websites, and personal family anecdotes to keep the memories of this marvelous World's Fair alive.
Posted by Beth on 3/30/2013 No comments:

Dedicated to the ones we loved.

This sign caught my eye as we were turning a corner one day, driving home from a hike. There is something so sweet and heartbreaking about this simply etched scroll of tree bark that pays tribute "to the cherished memories of those now gone." The semi-circular garden area, complete with a miniature dog house and several stones, suggests that this personal memorial park is the resting place of someone's animal friends. 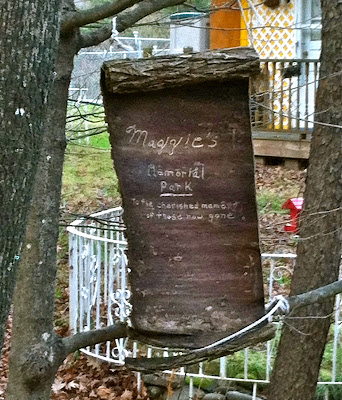 Several weeks later I was ambling through an old country cemetery. It was filled with tombstones of men and women who had lived and loved and died in the 1800s. In a far corner I found another memorial, also cut from stone and made to last. Even though the sweet memories of our animal friends are infinitely stronger than any physical representation in wood or steel or stone, seeing this little stone dog sitting faithfully in the snow tells me that once upon a time, maybe a hundred years ago, he or she was very much alive and loved and missed. Maggie's Memorial Park also shares that sentiment. Our animal friends give us something precious that lives beyond their own short lives - something that makes our time with them and beyond very rich indeed. 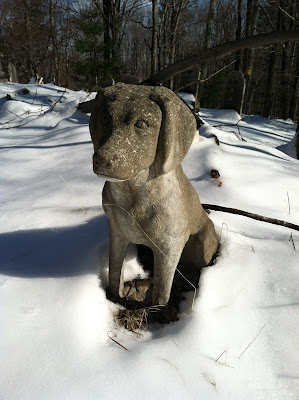 This past December, my boyfriend and I lost a special friend. Daisy, a beautiful husky mix with multi-colored heterochromic eyes, was John's companion for sixteen years and my friend for almost twelve. She epitomized every good quality associated with dogdom, particularly in her loyalty. Here is a one of my favorite photos and an oddity in and of itself! During the course of a year or so, a beaver couple had taken up residence in Warner Creek, damming it up to form a large pool. Daisy loved bounding into the water to greet her wild friends, who would pop up to make their presence known at her arrival. They would swim circle-eights around her…at a respectable distance, of course! I dedicate this post to Daisy. You were such a good girl. We miss you very much. 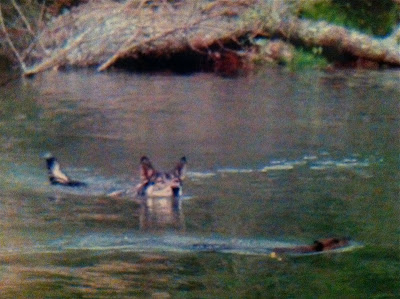