On this chilly midwinter morning, I'd like to revisit a place I discovered on a sultry summer afternoon. I can't resist the charm of a covered bridge, so when I saw a sign for one up ahead I had to stop, stretch and seek some shade, and once there, I got a double treat - an historical marker! I love these ubiquitous bits of Americana! They are chock full of trivia, usually marking the spot of a revolutionary conflict or letting us know that Washington kicked back with a Sam Adams in the local tavern. (He would have loved that beer!) But I prefer the more obscure memorials, like this one, which marks the spot of a 19th century angler's favorite fishing hole. No big whoop, right? On the contrary. This guy was major! I know because I googled him and found a wealth of information. 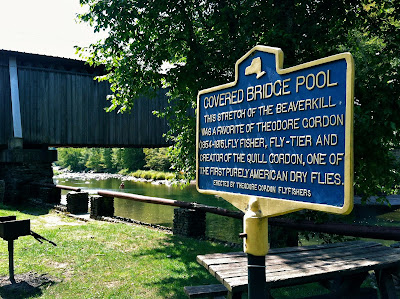 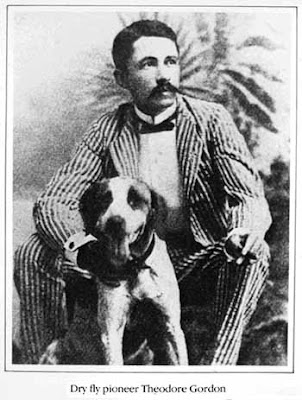 Theodore Gordon was deemed the father of the American school of dry-fly fishing. The Quill Gordon dry fly came about after he imported English fly-fishing tackle and flies and began to alter the English flies to precisely match the insects hatching in the Beaverkill and surrounding Catskill rivers. Gordon was also a consumptive hermit who sometimes wrote under the pseudonym Badger Hackle. I love a mustachioed man who can rock a striped seersucker suit and enjoys the company of a dog friend. So kudos, sir! I shan't forget you or your insanely jolly pseudonym.

But not everyone can aspire to Theodore Gordon levels of greatness and the historical markers such achievements bring. Just the same, we ordinary folk like to leave our own marks. We all want to say I was here at this time and at this place. Just look at the Paleolithic cave paintings at Lascaux...or on the beams of a covered bridge. Let's go in, shall we? 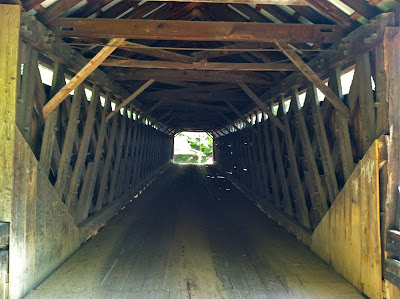 What narrative do these markings
suggest? They are found on opposite sides of the bridge, directly across from one another.

Jenna G. had been visiting this bridge every year for a span of seven years from 2004 until 2010. Joshua G. had been visiting every year from 2006 until 2010. Who are they and why did they not return in 2011? I felt stymied by this and tried to weave a sensible narrative for both. Perhaps they are brother and sister, born two years apart and their parents have been carving in their dates of visit since the birth of both. Mr. G, after witnessing a botched mob hit in early 2011, had to bring his family into a witness protection program and they are now living in San Jose under assumed identities. Perhaps the G was for Gordon? Hmm, the plot thickens! Or were Jenna and Joshua lovers who happened to share the same last initial? Jenna had been visiting the bridge for two years, until suddenly, in 2006, she met the fly-fisherman of her dreams! But it was a whirlwind, tempestuous romance that ended bitterly in 2011 with Jenna destroying all of Josh's prized fishing rods. Who knows…they're gone now, but like Theodore Gordon, they were there and have left their marks for generations (and curious bloggers) to ponder.

Wherever this year takes you, may it be on a path of renewal and replenishment, compassion and camaraderie…with way more ups than downs. 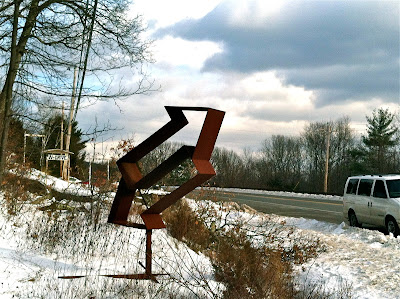 In my travels I've seen two of these striking sculptures. This one is on Route 28. Where is the other?  The first person to send the answer with a photo wins a brand new car mention on this blog!

FYI - You may wonder why that white van occasionally photo-bombs my posts. My partner in crime is behind the wheel, ready to whisk me away if I have to beat a hasty retreat!
Posted by Beth on 1/06/2013 2 comments: