Snot good. In fact, it's terrible.

While hiking along the Esopus river in Shandaken, I spied this sign nailed to a tree. At first, I felt my heart sink, thinking it was a "Missing Child" poster. On closer inspection, it was my stomach that had a bad reaction. 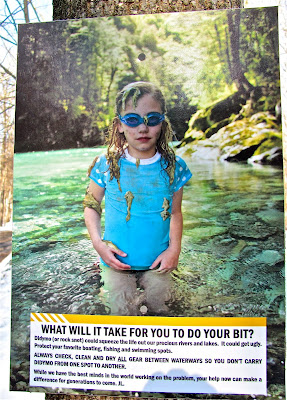 What is that poor girl covered in - Slime? Cooties? Boogers? Um, kinda sorta. It's the aptly named Rock Snot, aka Didymosphenia geminata or just plain Didymo for you rappers out there. It's a fast-spreading algae found in streams and rivers all over the world. It grows in long gooey masses that resemble big honkin' wads of snot. Scientists are confounded by its recent aggressiveness and are unsure whether environmental changes or genetic mutations are to blame. 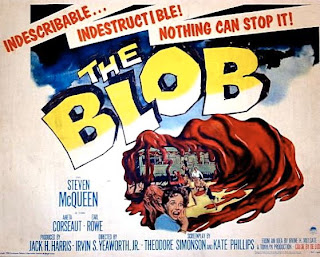 Unlike the Blob, freezing won't kill it. There are no known ways to eradicate the tenacious Snot, which can survive for 90 days on the sole of a boot, making it easy for anglers to transport it from river to river. Preventing its spread* is one way to control it, hence the signage. More gross-out facts about Rock Snot can be found here. I'm going to wash my boots now.

*In New Zealand, if you knowingly transport Rock Snot from one stream to another, you may be looking at 5 years in the clink!

Email ThisBlogThis!Share to TwitterShare to FacebookShare to Pinterest
Labels: it's alive

See the USA in a Chevrolet!

While hiking along the railroad tracks just north of Boiceville, I came upon what appears to be a serpentine root... 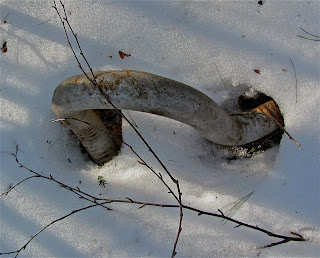 ...but is, in fact, a smaller piece to a larger puzzle. 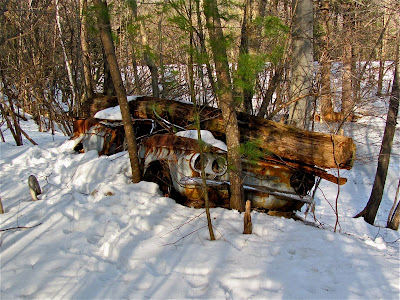 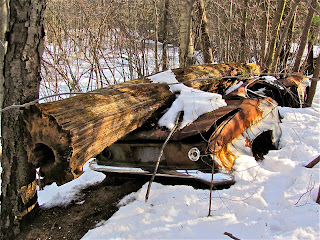 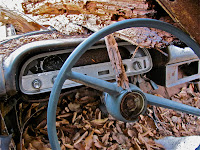 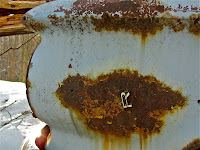 ...I put my mad research skillz to the test and determined this heap of metal to be a 1960 Chevrolet Corvair. 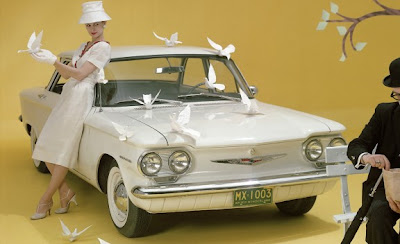 The rear-engined Corvair was the much-maligned focus of Ralph Nader's book, Unsafe at Any Speed. After Ralph's scathing expose, the car was doomed.

Yet knowing the make, model and year doesn't solve the greater mystery. How did it get here? 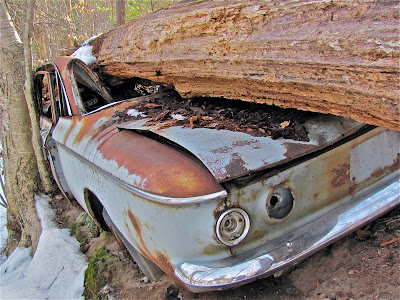 It's wedged precariously on a precipice, flanked by trees on either side. The log that crushed the top is cleanly cut on both ends and appears to have been dropped from a great height. I didn't find any stumps in the immediate area that would indicate where a tree had been cut. 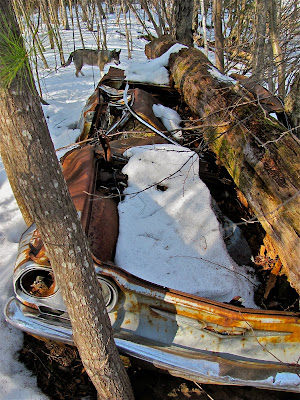 I would love to know the circumstances that led to this enigmatic automotive tableau.
Posted by Beth on 1/19/2010 3 comments: 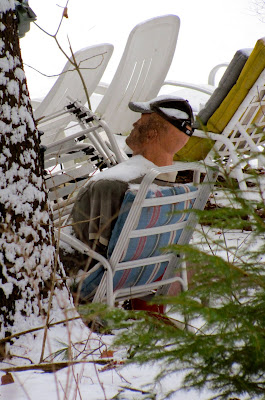 Do you crave the peace of mind that comes with owning a home security system but don't want the hassle involved with rigging up booby-traps or the expense of paying thousands of dollars for sensors and alarms? For a fraction of the time and cost, Acme is offering the Chaise Lounge Dummy. No assembly required - just prop this bad boy in a lawn chair and he does the rest, affording you the confidence in knowing that intruders will be too creeped out to target your home. For just $199.95, you'll get the basic model fully garbed in a rugged t-shirt and baseball cap! But that's not all - If you place your order by midnight tonight, you can choose (at NO cost to you) one of the following Chaise Lounge Dummy ensembles to suit any mood or occasion:
Posted by Beth on 1/11/2010 1 comment:

Ghosts of Hotels Past

Located near the groovy town of Woodstock is a trail that leads up to the ruins of the Overlook Mountain House. No, not that Overlook where all work and no play made Jack a psycho boy. This one is far more benign, yet has its fair share of eerie vibes. 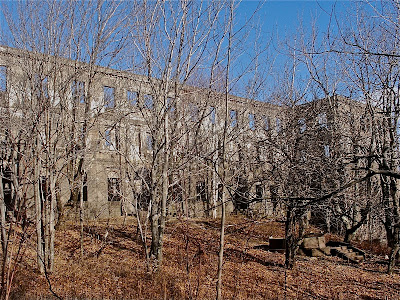 It was a swinging place to stay during the heyday of the Catskill vacation boom during the late 19th and early 20th centuries. The ruins that stand today were actually the third incarnation of the hotel. The original could house 300 guests, the most famous being President Ulysses S. Grant. After being destroyed by fire, another was built, and it too, succumbed to fire in 1923. Bad luck befell the last version of the hotel, which was never completed due to lack of funds and difficult access up the mountain. New York State owns the property today. 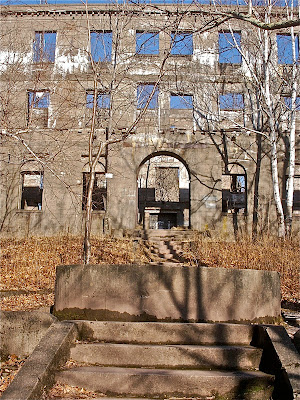 Let's ignore this sign and take a look around, shall we? 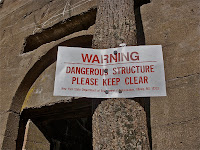 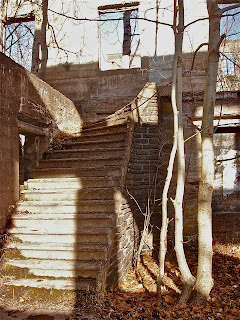 There are stairs leading up... 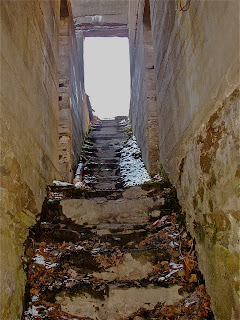 ...and stairs leading down.


There's plenty of room to dance (or play catch)... 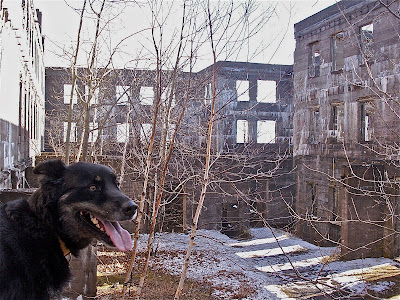 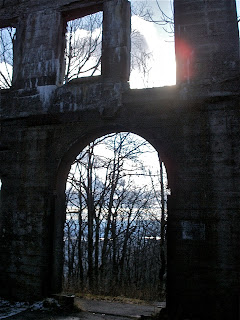 
Exploring the outside of the ruins can be challenging due to the steepness of the mountain. 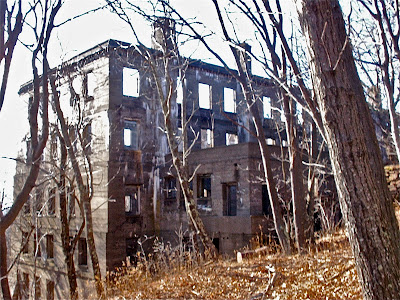 But I highly recommend it. All over the slope (and I mean ALL OVER) are bits of debris - porcelain, glass, metal -  sticking out from under leaves or half-buried in soil. Lift any rock and you'll discover cool stuff underneath. You'll also find quasi-shrines of found treasures on just about every rock surface. 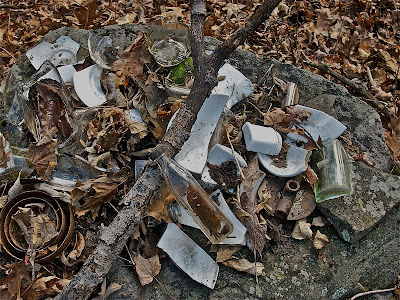 More information about the Overlook Mountain House has been unearthed here.