On a drizzly, unseasonably cold Phoenician day in May, I was fortunate to be stuffed into a pew at the Methodist Church Hall to bask in the white-hot energy of guest speaker Philippe Petit during a presentation of his new book, Why Knot? 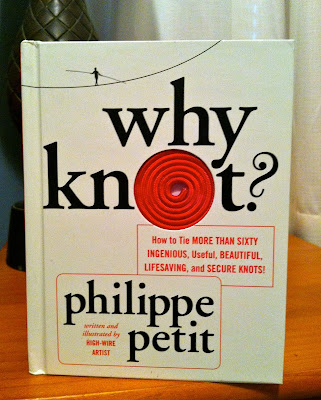 Petit spoke of ropes and cords, fibers and wires, strength and tension and how the difference between life and death could very well hinge on the simplicity of a well-tied knot. You know, like that time when he walked and danced and reclined a quarter mile above the earth on a wire strung between the Twin Towers WITHOUT A SAFETY HARNESS! Back and forth eight times, for nearly an hour. My knees turn to jelly just thinking about it. He was a week shy of his 25th birthday when he pulled off what may be the most astounding "art crime" of all time. If you haven't seen the documentary Man on Wire, do so tout de suite, sweetie! What Petit pulled off on that August morning in 1974 was breath-taking and daring and more intricately plotted than any grand bank heist, real or imagined. Mon Dieu! Just look at him up there! 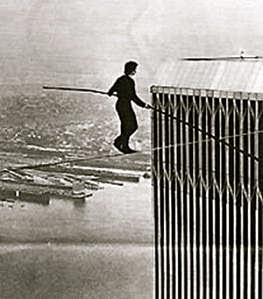 But back down to the nifty, knotty present and our very vibrant host. Here is Petit demonstrating a few of his favorite knots. He was so personable and charming, even while tying up an unsuspecting volunteer, and he was a total sweetheart to all of the children in attendance, making it a point to fully involve them in his presentation. 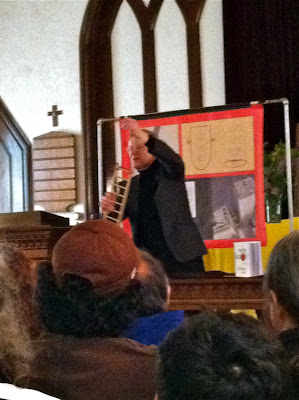 So perfectly poised is Monsieur Petit! Therefore, none of us were fooled when he took a stumble getting to the podium! He then proceeded to reveal the key in perfecting a fake foot fumble. I will not reveal this closely guarded secret, but I assure you I will use it only for good. 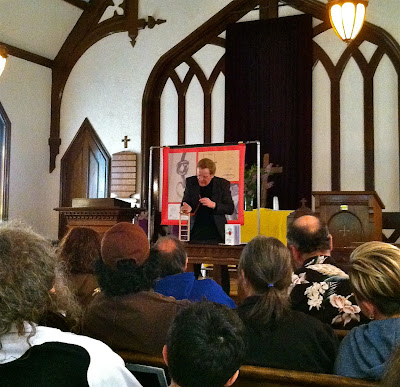 This special program was a benefit to raise money for the Phoenicia Library, which sadly, was destroyed by a fire in 2011. They are close to reaching their goal in rebuilding a bigger and better library for their patrons. The Golden Notebook, a Woodstock-based book shop was on hand with stacks of books (of which they were contributing 20% of the sales), including Man on Wire - Petit's account of what went into that amazing day; his lovely illustrated children's book, The Man Who Walked Between the Towers; and of course, his latest, Why Knot? - which includes a red cord for recreating all 60+ knots.  Petit illustrated the book and wrote all of the text and instructions. Here's my attempt at a double surgeon knot: 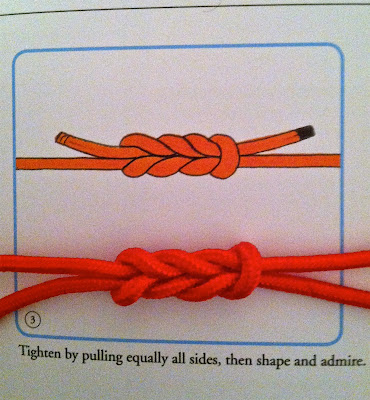 His text is as playful as the man himself.

While we queued up for the book signing, I found myself tongue-tied in the presence of this fabulous funambulist, but I managed to loosen my vocal chords enough to express my delight and to ask M. Petit if he would sign a book I had brought along - Let the Great World Spin by Colum McCann. This heartbreakingly tender novel weaves together several urban lives on that summer day back in '74 when a French sprite traversed a wire in the clouds between the great towers. Petit is not named in the novel, but he is the connecting cord between all of the characters. Here is what he wrote: 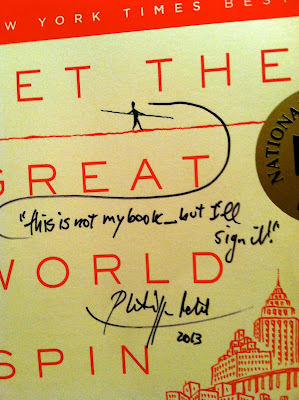 A multitude of thanks to the Phoenicia Library Trustees and Library Director Liz Potter, The Golden Notebook, the Methodist Church Hall, and to the magical and incomparable Philippe Petit for making an ordinary day in the mountains quite extraordinary!

For more information on the Phoenicia Library Fund…Click Here!

Extra special thanks go to my friend DeLisa Brown Guc for turning me on to Let the Great World Spin.
Posted by Beth on 5/28/2013